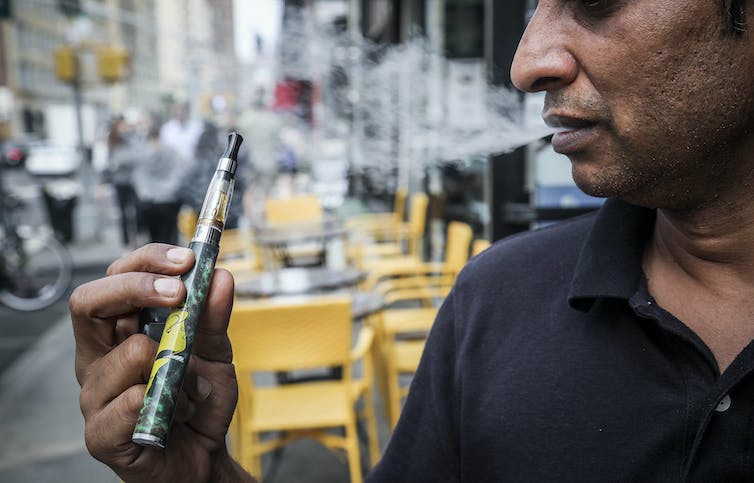 Today’s growing toll of deaths and serious illnesses associated with vaping represents just the latest variation on an age-old theme: our propensity to willfully inhale substances that damage our lungs.

Just as flavoring agents and ethylene glycol (often a component in antifreeze) seem likely culprits in damaging the lungs of vapers, so tobacco blackens the lungs of smokers with tar and increases the risk of a host of diseases, including pneumonia, COPD, and lung cancer, causing in total an estimated 480,000 US deaths per year.

As a physician, I am amazed by the lungs, whose spongy, pinkish tissue hides an incredibly intricate structure that can only be seen in detail with a microscope. Weighing in at about 1.5 pounds, each lung contains 1,500 miles of airways and about 500 million tiny air sacs called alveoli, without which we could not oxygenate our blood. Together the lungs pack into the chest an area for gas exchange the size of a doubles tennis court.

Why would anyone subject the lungs to the damage of vaping or smoking? How in the world did we ever come to believe that filling our lungs with the fumes of burning plants could be a good idea? For answers, consider the history of tobacco smoking and the role that tobacco companies played in misleading the public. 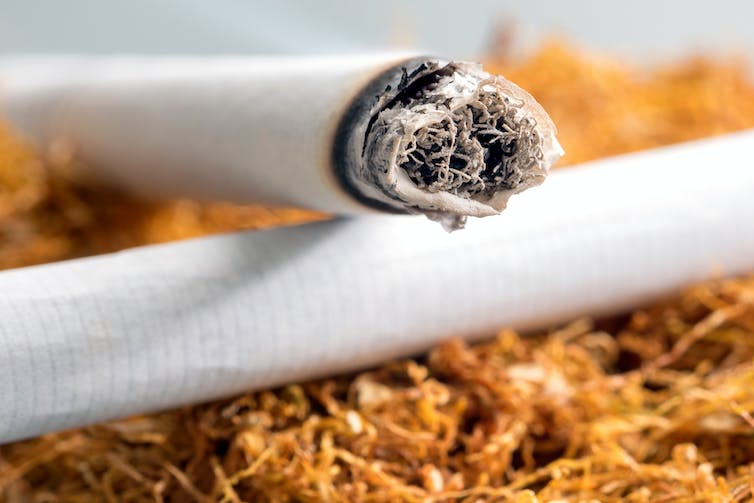 Tobacco has had wide appeal for millennia. Smoking surged in the U.S. during World War II. Funtay/Shutterstock.com

Tobacco smoking originated in America around 3000 B.C. Seafaring traders introduced it to Europe and Asia in the 17th century. One of the first anti-tobacco publications ever issued was King James I’s 1604 “Counterblaste to Tobacco,” in which he condemns the practice as “loathsome to the eye, hatefull to the nose, harmefull to the braine, and dangerous to the lungs.”

Smoking has several appeals. First, tobacco naturally contains nicotine, an insecticide and herbicide. Nicotine raises alertness, speeds reaction times, and stimulates the release of chemicals that transmit information between neurons, such as dopamine, that are associated with pleasure.

Second, smoking may provide opportunities to flout authority and fit in with peer groups.

Third, once someone has started smoking, attempts to stop may precipitate withdrawal symptoms such as headaches, nausea, anxiety and weight gain. 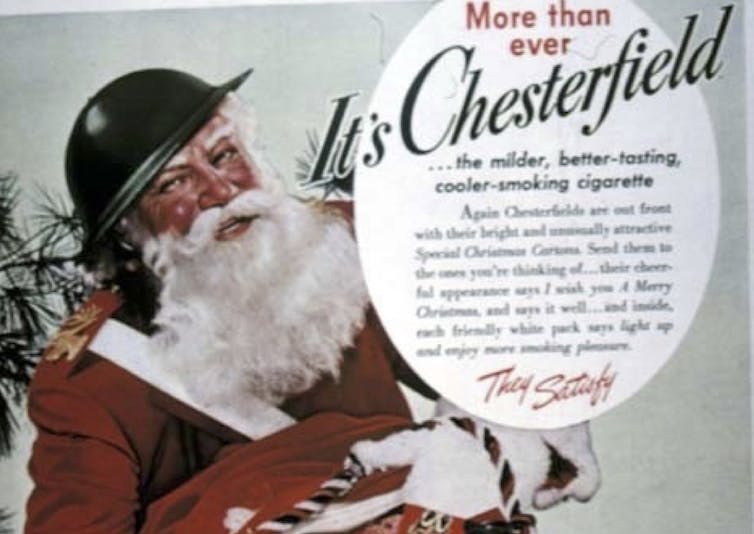 This ad from the World War II era encouraged people to send Chesterfields to men in the armed forces. University of California Tobacco Archives, CC BY-SA

The tobacco companies weren’t the only purveyors of tobacco. Over the course of World War I, cigarettes supplanted pipes as the most popular means of tobacco consumption. Soldiers who smoked pipes had to keep their loose tobacco dry, take time to fill their pipes, and relight them frequently, which could attract enemy attention.

By contrast, cigarettes were quick and easy to consume. Free cigarettes were distributed to the troops, and they soon began serving as a unit of currency, with the price of a haircut, for instance, set at two cigarettes. During the war, rates of smoking tripled.

During World War II, free cigarettes were again distributed to soldiers and even included with ration kits. Soldiers were encouraged to smoke to relieve boredom and improve morale, and in 1943 their demand helped U.S. companies manufacture 290 billion cigarettes. Tobacco company Phillip Morris even bragged in an ad that Americans “were smoking more.” Some tobacco ads showed patriotic wives and mothers shipping cartons of cigarettes to their loved ones on the front. At home, rationing made cigarettes scarcer, and on days they were available, people often lined up to buy them. Hitler hated smoking, reducing its prevalence in Germany, while Franklin Roosevelt, Winston Churchill and Joseph Stalin all smoked, contributing to its patriotic appeal at the time.

Many campaigns featured celebrity endorsements. One 1947 Chesterfield ad featured popular comedian Bob Hope, saying “Dorothy Lamour is my favorite brunette. Chesterfield is my favorite cigarette.” A 1950 Chesterfield holiday campaign showcased actor and future U.S. President Ronald Reagan, a cigarette dangling from his lips, saying “I’m sending Chesterfields to all my friends. That’s the merriest Christmas any smoker can have.”

To promote sales to men, campaigns linked cigarettes to masculinity. The Marlboro Man, conceived by advertising executive Leo Burnett in 1954, aimed to enhance the male appeal of filtered cigarettes, which had a feminine connotation. Running from 1954 to 1999, Marlboro ads featured rugged cowboys on the open range, often backed by bold music, such as the theme from the film, “The Magnificent Seven.” Ironically, many of the Marlboro Men eventually succumbed to tobacco-related diseases.

In the years following World War I, cigarette companies were disappointed to find that smoking was much less popular among women than men. They soon turned to advertising to stoke demand. One campaign, “torches of freedom,” was developed by Sigmund Freud’s nephew Edward Bernays, who paid young women to light cigarettes during a 1929 Easter parade, symbolizing their emancipation. By 1935, cigarette purchases by women had more than tripled.

Where are we now?

Often touted as a less harmful alternative for cigarette smokers, e-cigarettes are in fact also being marketed to youth who have never smoked. They are widely marketed on the internet, their makers sponsor music festivals and other events that appeal to the young, and ever more appealing flavors are being introduced, including cotton candy and gummy bears. In response, the FDA has announced plans to ban flavored e-cigarettes.

Although cigarette smoking has declined considerably since its heyday, the timeliness of its lessons for vaping remains undiminished. Americans today are still subjected to marketing for a variety of hazardous products, among which e-cigarettes are but one of the latest. So long as there is money to be made in moving such toxic merchandise, our lungs will bear the brunt of the damage.

This is an update that draws on material from a previously published article.

Deep knowledge, daily. Sign up for The Conversation’s newsletter.

This article is republished from The Conversation under a Creative Commons license. Read the original article.

Go Ask Your Dad is parenting advice with a philosophical bent as one dad explores what we want out of life, for ourselves and our children, th…